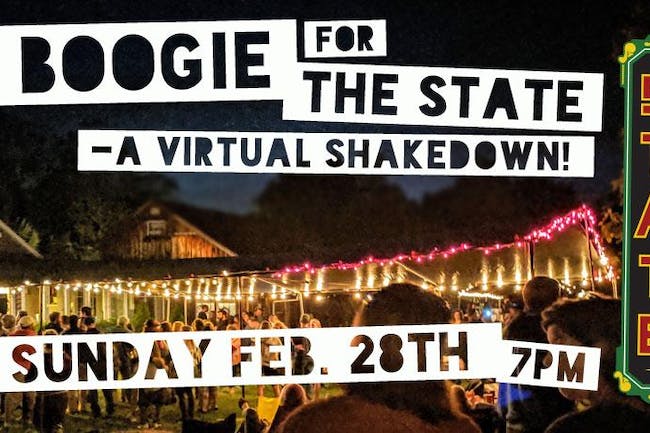 BOOGIE for the State – A Virtual Shakedown

iCal
Google
“BOOGIE for the State – A Virtual Shakedown” will stream at 7:00 PM on Sunday, February 28th on Facebook and Youtube: FREE!

BOOGIE for the State – A Virtual Shakedown

“The Boogie Shakedown” is a beloved backyard party organized and attended by local musicians and their friends and families. The first Boogie took place in 1998 and continued every year up until 2020. Executive Director Doug Levine states, “I still vividly remember attending my first Boogie Shakedown back in the late 90’s. It was the first time that I ever saw the Sim Redmond Band perform! We were all just a bunch of kids, getting together, having fun and making incredible music. Twenty-plus years later, I think our children look forward to The Boogie even more than the adults!” Levine continues, “2020 was an incredibly tough year in so many ways. I wanted to start this year off by organizing an event that these talented local musicians could take part in and give us all something to look forward to as we navigate these winter months, with a global pandemic still intact.”

“BOOGIE for the State – A Virtual Shakedown” will feature performances from a wide range of musicians that have performed at Boogies of yesteryear. Confirmed artists so far include Plastic Nebraska, Sim Redmond Band, Johnny Dowd, Maddy & Suave (Maddy Walsh & The Blind Spots), Mary Lorson & Billy Cote (Madder Rose), Common Railers, The Small Kings, The Rungs, Janet Batch, The Sutras, Don Bazley and The Moles. Donations will be encouraged throughout the concert and all proceeds will help support the participating artists while also sustaining the not-for-profit State Theatre of Ithaca, as their doors have remained closed since March 2020.