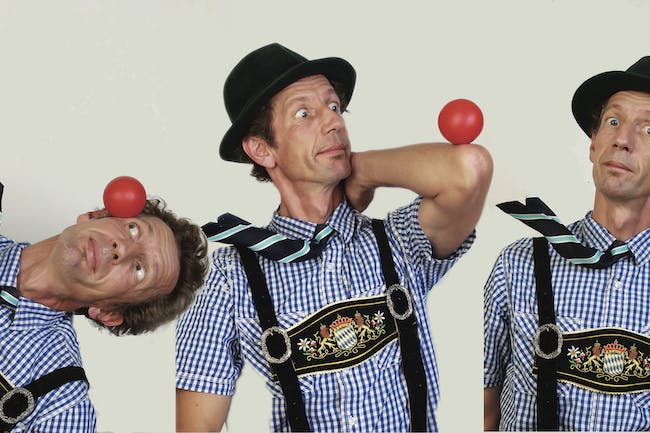 As a boy growing up in Berlin, young Hilby boasted no traumatic childhood experiences and exhibited no particular talents other than making funny faces at strangers and, as Hilby himself describes it, "breezing rhyzmically." Hilby grew up doing all the fun things that people do when they're not in school until they began to call him a grown-up. That's when he packed up his old kit bag, gave his mom a big kiss on the cheek, and set out on a journey that was to lead him all over the world.

Hilby travelled across the European continent to Asia. One of the talents he learned along the way was juggling. From that day forward his social life took a distinct downward turn as countless weeks went by during which he wouldn't listen to anybody but his own inner voice saying, "Come on Hilby, you can do it!" Well, sometimes he did and sometimes he didn't but what a learning spurt it's been ever since! His old "breezing rhyzmically" came in handy as Hilby discovered the ancient art of Chinese JOJO's--where else but in China itself--as well as many other unique performance techniques in his wanderings.

Hilby perfected his art on the road--from his first performance on the famous Islamabad Friday Market to Lhasa, Tibet, from Calcutta to Bangkok, Pnom Penh to Hong Kong, where he was finally arrested for reasons that are still a mystery. Was it the shock of the sudden introduction of humor into the soon-to-be Chinese enclave? Or the sheer lunacy of Hilby's antics which inspired a major traffic jam? Whatever it was, Hilby said to himself, "Next time I do my act with my clothes on!"

A six month stay in Japan with Buddhist monks and lots of chanting, as well as performing on weekends, polished what was already shining, and gave Hilby the confidence to perform his act in Japanese. He assumes his hosts understood what he said because they have invited him back every year since. Hilby is a truly international performer who is able to communicate through his humor with people of every nationality, size, shape and mental condition.

Hilby creates unforgettable moments for his audiences with such death-defying feats as The New Schrubber Schrubb Schrubb of Doom, in which he juggles an electric powered hedge trimmer, a bowling ball and a flaming beanie baby. Working in the tradition of the legendary silent vaudeville-inspired comedians such as Buster Keaton as well as the great mimes Marcel Marceau and Lecoq, Hilby presents a show without boundaries in which artistry and anarchy are blended into utter hilarity.

In the meantime, Hilby makes Ithaca, New York his home, living happily in a co-operative housing community with other happy people, sheeps and a few chickens. A lot of Hilby's inspiration comes from watching the children in his community at play, learning from them how to look at the world with eyes full of curiosity.

What a wild ride it's been! From boy scout cookie fund raiser to solo performance on cruise ships, Hilby has over time established a complete show and name for himself, with many repeat customers. It has always been a wonderful experience (well, almost always) with many beautiful people and experiences along the way.

As Hilby says, "See you out there somewhere! Just remember to keep breezing rhyzmically."